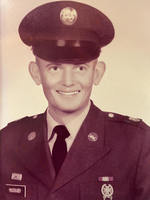 David was raised in Lone Grove by his beloved mother and step father, Gertie and Sam Roe whom he considered his role model and learned a lot from. He went to school in Lone Grove from grade school to high school until he went into the United States Army in 1965. David was stationed at Carson, CO and was an E-5 SGT. While in the Army, David obtained an GED in 8 hours. He was honorably discharged in 1967 in St. Louis, MO. In 1967, he met Lou Steudeman at Jay's Drive in in Ardmore and later married in 1968 in Bonham, TX. David had also went to college at Murray State for Artificial Insemination for cattle. His work carried him through many interesting places where he met and made many friends along the way. After his stint in the Army, he came back to Ardmore where he had worked at Comet Feed Store and from there, he started David Huckaby Dirt Works also working on Hud projects all over Oklahoma and Texas. David then worked as the owner/operator of H&H Trucking. He enjoyed his cattle, scuba diving, noodling and gardening.

Honorary Pallbearers will be Aaron Roe, Jason Roe, Lynn Henry, Buck Vierra and a host of other nieces and nephews.

Visitation will be held Monday evening from 6-8 P.M. at Alexander Gray Funeral Home in Wilson.

Memories may be shared online at www.alexanderfuneralhome.org.

All rights reserved. This obituary is also archived at obittree.com